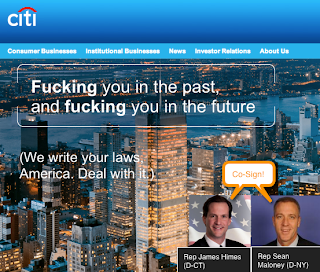 Nearly six years since massive financial fraud and speculative market manipulation drove the global capitalist economy off the rails, congressional grifters in both benighted political parties have turned over the legislative process to bankster lobbyists.

Last week, The New York Times revealed that "Bank lobbyists are not leaving it to lawmakers to draft legislation that softens financial regulations. Instead, the lobbyists are helping to write it themselves."

According to emails leaked to the Times, a bill that "sailed through the House Financial Services Committee this month--over the objections of the Treasury Department--was essentially Citigroup's."

Despite huge losses during the capitalist economic meltdown, which included heavy exposure to toxic collateralized debt obligations (CDOs) which cost shareholders some 85 percent of asset value by early 2009, by 2012 the bank had built up an enormous cash horde to the tune of $420 billion (£277.7bn), derived from selling some $500 billion (£330.6bn) of "special assets" placed in Citi holdings that were guaranteed from losses by the US Treasury Department; this included untaxed overseas profits of some $35.9 billion (£23.74bn) according to Bloomberg.

As I reported last month, Citigroup was handed some $45 billion (£29.78bn) in TARP funds while the Treasury Department and Federal Reserve secretly backstopped more than $300 billion (£197.31bn) in toxic assets on their books. In addition to receiving "$2.5 trillion [£1.64tn] of support from the American taxpayer through capital infusions, asset guarantees and low-cost loans," as Wall Street on Parade analyst Pam Martens pointed out, like other too-big-to-jail banks such as Wachovia and HSBC, the Citi brand has long been associated with washing dirty cash for drug cartels.

Hit with a toothless Consent Order by the Federal Reserve in March over "deficiencies in the Banks' BSA/AML [Bank Secrecy Act/Anti-Money Laundering] compliance programs," federal regulators charged that Citigroup and their affiliate Banamex "lacked effective systems of governance and internal controls to adequately oversee the activities of the Banks with respect to legal, compliance, and reputational risk related to the Banks' respective BSA/AML compliance programs."

The Federal Reserve "action" followed an anemic Consent Order last year by the Office of the Comptroller of the Currency (OCC) which also cited Citi's failure to "adopt and implement a compliance program that adequately covers the required BSA/AML program elements due to an inadequate system of internal controls." Additionally, the OCC charged that the "Bank did not develop adequate due diligence on foreign correspondent bank customers and failed to file Suspicious Activity Reports ('SARs') related to its remote deposit capture/international cash letter instrument activity in a timely manner."

Nevertheless, as with other criminogenic banks such as JPMorgan Chase, similarly hit with an equally toothless Consent Order by the Office of the Comptroller of the Currency in January, in their infinite wisdom the Federal Reserve averred that their Citigroup action was issued "without this Order constituting an admission or denial by Citigroup of any allegation made or implied by the Board of Governors in connection with this matter, and solely for the purpose of settling this matter without a formal proceeding being filed and without the necessity for protracted or extended hearings or testimony."

In other words, let's sweep this under the rug as quickly as possible and move on. But before we do, let's step back for a moment and wrap our heads around a few salient facts.

Here's a bank with a documented history as the GAO revealed in 1998, of laundering drug money for well-placed Juárez and Gulf Cartel crony Raúl Salinas de Gortari, the brother of former Mexican president Carlos Salinas, charged with amassing a multimillion dollar fortune from narcotics rackets and then squirreling it away in London, Switzerland and the Cayman Islands.

Does this evoke any memories?

Beginning in 1992, Citibank "assisted Mr. Salinas with these transfers and effectively disguised the funds' source and destination, thus breaking the funds' paper trail." And they did so by creating "an offshore private investment company named Trocca, to hold Mr. Salinas's assets, through Cititrust (Cayman) and investment accounts in Citibank London and Citibank Switzerland," and then failed to "prepare a financial profile on him or request a waiver for the profile, as required by then Citibank know your customer policy."

Keep in mind that when Swiss prosecutors completed their money laundering investigation, The New York Times disclosed that "Swiss police investigators have concluded that a brother of former President Carlos Salinas de Gortari played a central role in Mexico's cocaine trade, raking in huge bribes to protect the flow of drugs into the United States."

That Swiss report stated, "When Carlos Salinas de Gortari became President of Mexico in 1988, Raúl Salinas de Gortari assumed control over practically all drug shipments through Mexico. Through his influence and bribes paid with drug money, officials of the army and the police supported and protected the flourishing drug business."

Does the name of former Banamex CEO Roberto Hernández ring any bells?

Described as "the single biggest winner" of Mexican bank privatizations engineered by the Bush and Clinton regimes during the 1990s as Narco News disclosed, a subsequent investigation revealed that "Hernández had been accused--publicly and via a criminal complaint--by the daily newspaper Por Esto! of trafficking tons of Colombian cocaine through his Caribbean costa properties on that peninsula since 1997."

And when Citigroup acquired Banamex in 2001 for the then-princely sum of $12.5 billion (£8.27bn), it was described as the largest US-Mexican corporate merger in history. Should it surprise us that this Citi subsidiary was named alongside parent Citigroup by the OCC and Federal Reserve for repeated failures to adequately police dirty money flowing into their coffers?

Members of the House Financial Services Committee should examine why they would turn over the legislative process to a criminal financial cartel!

As Times' journalists Eric Lipton and Ben Protess reported, "Citigroup's recommendations were reflected in more than 70 lines of the House committee's 85-line bill. Two crucial paragraphs, prepared by Citigroup in conjunction with other Wall Street banks, were copied nearly word for word. (Lawmakers changed two words to make them plural.)"

Proving yet again, that Washington lawmakers are beholden to their Wall Street masters, MapLight, a nonpartisan research group that "reveals money's influence on politics in the US Congress," disclosed that legislators "serving" on the House Financial Services Committee "approved six bills that would roll back pieces of the Dodd-Frank Act designed to improve regulation of the derivatives market."

The $700 trillion derivatives market, 93.2 percent of which is controlled by the four largest too-big-to-fail-and-jail US banks, Bank of America, Goldman Sachs, JPMorgan Chase and Citigroup, is a cash cow and shadow market for crooked financial insiders. HR 992, which rolled-back a key provision of 2010's anemic Dodd-Frank financial "reform" legislation, Sec. 716, would have required banks to spin off their derivatives activities into separate units that would not have access to federal bank subsidies, i.e., taxpayer bailouts.

"In recent weeks, the Times reported, "Wall Street groups also held fund-raisers for lawmakers who co-sponsored the bills. At one dinner Wednesday night, corporate executives and lobbyists paid up to $2,500 to dine in a private room of a Greek restaurant just blocks from the Capitol with Representative Sean Patrick Maloney, Democrat of New York, a co-sponsor of the bill championed by Citigroup."

Responding to questions, Financial Services Committee member Jim Himes, a former Goldman Sachs banker, third-term Connecticut Democrat and one of the top recipients of Wall Street largess to the tune of $194,500 according to OpenSecrets told the Times: "It's appalling, it's disgusting, it's wasteful and it opens the possibility of conflicts of interest and corruption. It's unfortunately the world we live in."

No Mr. Himes, it's the world you live in.

While your colleague across the aisle, Stephen Fincher (R-TN), cites Bible verses to justify gutting federal nutritional assistance to 47 million hungry Americans while being the "the second largest recipient of farm subsidies in the United States Congress" according to Forbes, and received some $3.48 million (£2.3m) since 1999 in USDA farm subsidies while doing the "Lord's work" according to the Environmental Working Group, the US Congress, including "liberal" Obama Democrats have promoted every filthy piece of legislation that facilitates Wall Street's plundering of the American people.

Referencing the recent vote on HR 992, the Center for Responsive Politics reported that in the first quarter of 2013, members of the Financial Services Committee "received more than $1.3 million in donations to their campaigns and leadership PACs from the securities and investment industry and commercial banks."

According to OpenSecrets, "By far the largest source of cash from the two industries was the Investment Company Institute, a trade association representing Wall Street firms. The ICI gave at least $129,000 to members of the House Financial Services Committee. Other trade groups representing banks and investment firms, including the American Bankers Association and the Independent Community Bankers of America, were also major contributors."

Commenting on this latest gift to Wall Street criminals, the World Socialist Web Site observed: "Flush with the $85 billion in cash printed up and handed to the banks every month by the Federal Reserve, business at the Wall Street casino is booming. Stock values are at record levels and so are bank profits, amidst declining wages and mass poverty."

"Under these conditions," Marxist critic Andre Damon averred, "the banks have been pushing to rip up even the very modest restrictions on financial speculation, while broadening the scope of government bailout laws. The aim is simple: to give banks the maximum ability to speculate without constraint, while getting the maximum possible government assistance if and when the bubble collapses."

None of this should surprise anyone who has paid the least attention to the cronyism and financial parasitism of the Obama regime.

From get-out-of-jail-free-cards passed out to drug money laundering banks by Eric Holder's Justice Department, to the appointments of Citigroup alumnus and Cayman Islands tax-dodger Jacob Lew as Treasury Secretary, Debevoise & Plimpton partner Mary Jo White over at the Securities and Exchange Commission to the nomination of billionaire Hyatt Hotel heiress, subprime mortgage "pioneer" and union-buster Penny Pritzker to lead the Commerce Department, it's a bankster world, all the time.

How's that for Hope and Change™!
Posted by Antifascist at 10:51 AM