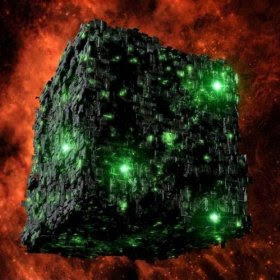 From driftnet surveillance to data mining and link analysis, the secret state has weaponized our data, "criminal evidence, ready for use in a trial," as Cryptohippie famously warned.

No longer the exclusive domain of intelligence agencies, a highly-profitable Surveillance-Industrial Complex emerged in the 1980s with the deployment of the NSA-GCHQ ECHELON intercept system. As investigate journalist Nicky Hager revealed in CovertAction Quarterly back in 1996:

The ECHELON system is not designed to eavesdrop on a particular individual's e-mail or fax link. Rather, the system works by indiscriminately intercepting very large quantities of communications and using computers to identify and extract messages of interest from the mass of unwanted ones. A chain of secret interception facilities has been established around the world to tap into all the major components of the international telecommunications networks. Some monitor communications satellites, others land-based communications networks, and others radio communications. ECHELON links together all these facilities, providing the US and its allies with the ability to intercept a large proportion of the communications on the planet.

With the exponential growth of fiber optic and wireless networks, the mass of data which can be "mined" for "actionable intelligence," covering everything from eavesdropping on official enemies to blanket surveillance of dissidents is now part of the landscape: no more visible to the average citizen than ornamental shrubbery surrounding a strip mall.

That process will become even more ubiquitous. As James Bamford pointed out in Wired Magazine, "the Pentagon is attempting to expand its worldwide communications network, known as the Global Information Grid, to handle yottabytes (10 to the 24th bytes) of data. (A yottabyte is a septillion bytes--so large that no one has yet coined a term for the next higher magnitude.)"

"It needs that capacity because, according to a recent report by Cisco, global Internet traffic will quadruple from 2010 to 2015," Bamford reported, "reaching 966 exabytes per year. (A million exabytes equal a yottabyte.) ... Thus, the NSA's need for a 1-million-square-foot data storehouse. Should the agency ever fill the Utah center with a yottabyte of information, it would be equal to about 500 quintillion (500,000,000,000,000,000,000) pages of text."

A former top NSA official turned whistleblower, William Binney, who resigned in 2001 shortly after the agency stood-up the Bush regime's warrantless wiretapping programs (now greatly expanded under Hope and Change™ huckster Barack Obama), "held his thumb and forefinger close together" and told Bamford, "We are that far from a turnkey totalitarian state."

Last week, Binney said on Democracy Now when queried whether there were any differences between the Bush and Obama administrations, "Actually, I think the surveillance has increased. In fact, I would suggest that they've assembled on the order of 20 trillion transactions about U.S. citizens with other U.S. citizens."

Add to that the Transportation Security Administration's invasion of "travel by other means," as Jennifer Abel pointed out in The Guardian, through the agency's usurpation of "jurisdiction over all forms of mass transit," and it should be clear to Americans (though it isn't) that there is no way of escaping the secret state's callous trampling of our rights.

Commenting, Salon's Glenn Greenwald pointed out that the "domestic NSA-led Surveillance State which Frank Church so stridently warned about has obviously come to fruition."

"The way to avoid its grip is simply to acquiesce to the nation's most powerful factions, to obediently remain within the permitted boundaries of political discourse and activism."

"Accepting that bargain," Greenwald noted, "enables one to maintain the delusion of freedom--'he who does not move does not notice his chains,' observed Rosa Luxemburg--but the true measure of political liberty is whether one is free to make a different choice."

But in a militarized Empire such as ours the only "choice" is to shut up, keep your head down--or else.

Militarist solutions to intractable social contradictions, the oft-maligned class struggle, do not appear out of the blue. Indeed, NSA's ECHELON system, the template for STELLAR WIND and the agency's associated email and web search database known as PINWALE, were technological responses by Western elites to challenges posed by the "excess of democracy" decried by Samuel Huntington and his cohorts in The Crisis of Democracy, published by the Rockefeller-funded Trilateral Commission.

Social critic Andrew Gavin Marshall observed that for Huntington and the right-wing ideologues who mounted an intellectual counterattack against the democratic "excesses" of the 1960s, the "massive wave of resistance, rebellion, protest, activism and direct action by entire sectors of the general population which had for decades, if not centuries, been largely oppressed and ignored by the institutional power structure of society," were "terrifying."

Fast forward to today. As the global economic crisis deepens and hundreds of millions of people worldwide reject the "austerity" boondoggles of the financial sharks who brought on the crisis through massive frauds disguised as "investment opportunities," our corporatist masters are fighting back and have turned to police state methods to prop-up their illegitimate rule.

Nor should it surprise us, as George Ciccariello-Maher pointed out in CounterPunch in the wake of last summer's London "riots," a mass response to police murder (coming soon to an "urban exclusion zone" near you!): "Irrational, uncontrollable, impermeable to logic and unpredictable in its movements, these undesirables have once again ruined the party for everyone, as they have done from Paris 1789 to Caracas 1989. In Fanon's inimitable words: 'the masses, without waiting for the chairs to be placed around the negotiating table, take matters into their own hands and start burning...'"

Call it the great fear of those lording it over the slaves down on the global plantation!

Combining attributes of Jeremy Bentham's "Panopticon" and George Orwell's ubiquitous "Big Brother," the National Security State, as it works to stave-off its own well-deserved collapse, seeks to root out and marginalize "dangerous" individuals and ideologies thereby "inoculating" the body politic from what were euphemistically called in the halcyon days of J. Edgar's COINTELPRO operations, "subversive elements."

It matters little whether today's "usual suspects" are landless peasants, displaced workers, investigative journalists, civil libertarians or innocent citizens mistakenly caught in one dragnet or another: "threats" will be "neutralized" or more pointedly, in the evocative language employed by spooks: "Terminated with extreme prejudice."

Operating alongside tried and methods--police repression and violence--contemporary crackdowns are guided by "robust situational awareness" gleaned from the wealth of personal data stored on multiple digital devices (the spies in our pockets) and in huge databases. As Cryptohippie averred: "An electronic police state is quiet, even unseen. All of its legal actions are supported by abundant evidence. It looks pristine."

"When we produced our first Electronic Police State report," the privacy professionals wrote, "the top ten nations were of two types:

1. Those that had the will to spy on every citizen, but lacked ability.
2. Those who had the ability, but were restrained in will.

But as they revealed in their 2010 National Rankings, "This is changing: The able have become willing and their traditional restraints have failed." The key developments driving the global panopticon forward are the following:

• The USA has negated their Constitution's fourth amendment in the name of protection and in the name of "wars" against terror, drugs and cyber attacks.
• The UK is aggressively building the world of 1984 in the name of stopping "anti-social" activities. Their populace seems unable or unwilling to restrain the government.
• France and the EU have given themselves over to central bureaucratic control.

Rejecting the orthodoxies and received wisdom of his day, Debord argued that "The reigning economic system is a vicious circle of isolation. Its technologies are based on isolation, and they contribute to that same isolation. From automobiles to television, the goods that the spectacular system chooses to produce also serve it as weapons for constantly reinforcing the conditions that engender 'lonely crowds.' With ever-increasing concreteness the spectacle recreates its own presuppositions."

It is again worth noting that the much-vaunted "global village" which sprung to life with the widespread deployment of the internet in the 1990s, as a profit-center for the giant telecoms and a spy machine for the secret state, was, after all, a casual by-product of the Pentagon's quest for a wartime digital communications system.

But now that every facet of daily life has become a war theater, what are we to make of the electronic walled gardens offered for sale by Apple, Facebook and Google, replete with their multitude of proprietary apps which, like Bentham's "panopticon," have become prisons of our own choosing?

Ponder Debord's rigorous theorems in this light; substitute "cell phone" or "GPS" for "automobile," and "internet" for "television" and it becomes clear pretty quickly that unbeknownst to the militarist inventors of the "digital highway" they had stumbled upon the perfect means for enabling a global control grid.

As Debord averred: "If the spectacle, considered in the limited sense of the 'mass media' that are its most glaring superficial manifestation, seems to be invading society in the form of a mere technical apparatus, it should be understood that this apparatus is in no way neutral and that it has been developed in accordance with the spectacle's internal dynamics."

"Internal dynamics" geared only towards its own survival and reproduction come hell or high water. Endless wars on "terror," "drugs," "crime," take your pick. Prison-Industrial Complexes? Genetically-engineered plagues? Ecological collapse? Step right this way! There's an app for that and much, much more!

Indeed, "if the social needs of the age in which such technologies are developed can be met only through their mediation, if the administration of this society and all contact between people has become totally dependent on these means of instantaneous communication, it is because this 'communication' is essentially unilateral," that is, "the product of the social division of labor that is both the chief instrument of class rule and the concentrated expression of all social divisions."

Keep in mind that Debord's seminal text was penned in 1967, long before the wet dreams of securocrats had been brought to life like Frankenstein's monster. Once a disquieting and uncanny shape looming on some far-off, dystopian horizon, the world of smart phones and dumbed-down people is, simply put, an Americanized Borg cube where "resistance" is always "futile."

The question is, in our fallen Republic does anyone even notice?
Posted by Antifascist at 11:39 AM

and 'The Surveillant Assemblage' here:

It also had me revisiting Deleuze's Postscript on the Societies of Control here:

...and On Modern Servitude here:

It also had me reopening 'Welcome to the Machine' here:

...which is most definitively worth reading.

But the most important addition I'd like to express is my indebted level of gratitude for the incredible amount of insight and work you share here at AC.