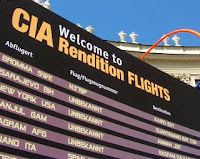 On May 16, in another shameless capitulation to the Executive Branch, the U.S. Supreme Court declined to review a lawsuit brought by victims of CIA torture, handing Jeppesen DataPlan, a subsidiary of defense giant Boeing, a free pass for services "rendered" as the Agency's booking agent.

The five men, Binyam Mohamed, Ahmed Agiza, Abou Elkassim Britel, Mohamed Farag Ahmad Bashmilah and Bisher al-Rawi, claimed with copious evidence to back their assertions, that their "rendition" and torture was facilitated by the Boeing subsidiary.

Not a single plaintiff was ever charged with a so-called "terrorism" offense let alone convicted of a crime in open court. That didn't stop America's shadow warriors from kidnapping, drugging and then whisking them away--aboard aircraft provided by Jeppesen--to CIA "black sites" or the dungeons of close U.S. allies in Europe and the Middle East.

In 2006, the firm's filthy role in CIA torture programs was exposed by investigative journalist Jane Mayer in The New Yorker.

Indeed, one Bob Overby, Jeppesen's managing director, said during a breakfast for new hires in San Jose, Calif., "We do all of the extraordinary rendition flights--you know, the torture flights. Let's face it, some of these flights end up that way."

Technical writer Sean Belcher blew the whistle on the firm and told Mayer that Overby, extolling the virtues of the corporatist bottom line, said: "It certainly pays well. They"--the CIA--"spare no expense. They have absolutely no worry about cost. What they have to get done, they get done."

Another recipient of the CIA tender mercies was Khaled el-Masri, a German citizen, who was kidnapped while on vacation in 2004 by the Agency after attempting to cross the border between Serbia and Macedonia.

According to The New Yorker, Masri charged in court papers that "Macedonian authorities turned him over to a C.I.A. rendition team. Then, he said, masked figures stripped him naked, shackled him, and led him onto a Boeing 737 business jet."

"Flight plans, Mayer reported, "prepared by Jeppesen show that from Skopje, Macedonia, the 737 flew to Baghdad, where it had military clearance to land, and then on to Kabul. On board, Masri has said, he was chained to the floor and injected with sedatives. After landing, he was put in the trunk of a car and driven to a building where he was placed in a dank cell. He spent the next four months there, under interrogation."

The CIA claimed it was all a case of "mistaken identity" when he was finally released, and dumped penniless, along the side of a road in the former Yugoslavia.

Mayer disclosed that after delivering their human cargo up to torture, "the American flight crew fared better than their passenger. Documents show that after the 737 delivered Masri to the Afghan prison it flew to the resort island of Majorca, where, for two nights, crew members stayed at a luxury hotel, at taxpayers' expense."

As a corporate entity directly profiting from the CIA's torture programs by planning and facilitating Agency ghost flights, Jeppesen bears equal responsibility for serious breeches of U.S. and international law. As a co-conspirator with the CIA, Jeppesen was complicitous in the Agency's illegal kidnapping and disappearance of "terrorism" suspects into CIA black sites across Europe, Asia and the Middle East.

While American "justice" is now a euphemism for impunity for the ruling rich and a maximum security prison cell for the poor, others are far less squeamish when it comes to pointing the finger, and naming names.

As the Council of Europe reported back in 2007, "The Legal Affairs and Human Rights Committee now considers it factually established that secret detention centres operated by the CIA have existed for some years in Poland and Romania, though not ruling out the possibility that secret CIA detentions may also have occurred in other Council of Europe member states."

The Council "earnestly deplores the fact that the concepts of state secrecy or national security are invoked by many governments (United States, Poland, Romania, 'the former Yugoslav Republic of Macedonia', Italy and Germany, as well as the Russian Federation in the Northern Caucasus) to obstruct judicial and/or parliamentary proceedings aimed at ascertaining the responsibilities of the executive in relation to grave allegations of human rights violations."

"The Committee also stresses," human rights rapporteur Dick Marty wrote, "the need to rehabilitate and compensate victims of such violations. Information as well as evidence concerning the civil, criminal or political liability of the state's representatives for serious violations of human rights must not be considered as worthy of protection as state secrets."

Not that any of this mattered to the U.S. government. Shortly after the ACLU's suit was filed, Bush's Justice Department intervened, claiming that the case could not go forward and asserted the "state secrets privilege," arguing that evidence presented by the plaintiffs in court detailing their horrific treatment would undermine U.S. "national security."

Never mind that these programs were hardly secret and had been disclosed by multiple investigations by journalists and human rights organizations. Shortly after taking office in 2009, this position was defended by Barack Obama's discredited "change" regime, claiming that the entire case was a "state secret."

During arguments before the Ninth Circuit in early 2009, the San Francisco Chronicle reported that Justice Department attorney Douglas Letter told the court in a thinly-veiled warning that "judges shouldn't play with fire."

However, ACLU attorney Ben Wizner said during oral arguments "that the supposedly ultra-secret rendition program is widely known." Wizner noted "that Sweden recently awarded $450,000 in damages to one of the plaintiffs, Ahmed Agiza, for helping the CIA transport him to Egypt, where he is still being held and allegedly has been tortured."

"The notion that you have to close your eyes and ears to what the whole world knows is absurd," Wizner told the court.

Winding its way through the U.S. Ninth Circuit Court of Appeals, a three-judge panel overturned the District Court's dismissal of the suit, ruling that the government cannot dismiss the case and that the "state secrets privilege" can only be invoked after specific evidence is presented. The three-judge panel went further however, and stated forcefully in their opinion:

At base, the government argues ... that state secrets form the subject matter of a lawsuit, and therefore require dismissal, any time a complaint contains allegations, the truth or falsity of which has been classified as secret by a government official. The district court agreed, dismissing the case exclusively because it "involves allegations about [secret] conduct by the CIA." This sweeping characterization of the "very subject matter" bar has no logical limit--it would apply equally to suits by US citizens, not just foreign nationals; and to secret conduct committed on US soil, not just abroad. According to the government's theory, the Judiciary should effectively cordon off all secret government actions from judicial scrutiny, immunizing the CIA and its partners from the demands and limits of the law.

But there's the rub: the secret state had no intention of ever presenting evidence that the plaintiffs' treatment was "legal," and in fact, sought to cover their tracks and those of their defense industry partners in the hope of completely erasing this case, and others, including those involving the government's illegal warrantless wiretapping programs which most certainly "cordon off all secret government actions from judicial scrutiny," effectively expunging evidence of government crime from the public record.

Undaunted, the Obama administration appealed the decision before a full panel of 11 judges, and in September 2010, that panel reversed the Ninth Circuit's earlier ruling by a 6-5 vote.

Last December, the ACLU petitioned the Supreme Court to review the lower court's decision dismissing the lawsuit, but the Court declined.

"With today's decision, Ben Wizner, the litigation director of the ACLU's National Security Project, said in a press release, that "the Supreme Court has refused once again to give justice to torture victims and to restore our nation's reputation as a guardian of human rights and the rule of law."

Decrying the court's refusal to review the case against Jeppesen, Wizner said that "to date, every victim of the Bush administration's torture regime has been denied his day in court. But while the torture architects and their enablers have escaped the judgment of the courts, they will not escape the judgment of history."

Last month's dismissal of the ACLU's petition is all the more ironic considering that the Court, in an 8-1 ruling, permits police to conduct searches of private homes without benefit of obtaining a warrant if they believe an "exigent [emergency] circumstance" prevails.

In other words, we're to meekly submit to the further erosion of Fourth Amendment protections and can no longer seek relief from the courts simply because police, whom we know never lie or frame criminal defendants, have reason to "suspect" that illegal behavior is taking place behind closed doors!

But as the World Socialist Web Site points out, "a host of recent decisions, all of which in one way or another purport to show 'deference' to the executive, whether for reasons of 'national security,' 'state secrets,' or the 'exigencies' of police work, the Supreme Court is abandoning any effort to restrain the exercise of executive power."

Socialist critic Tom Carter writes, "These decisions, taken together, effectively relegate a US judge to the same role as a judge in a police state, who functions merely as an after-the-fact rubber stamp for executive decisions," and "should be taken as a warning of things to come."

While the three Ninth Circuit judges who slapped down the Obama administration's spurious claim of "state secrets" in the Mohamed vs. Jeppesen case believe that "the Founders of this Nation knew well ... arbitrary imprisonment and torture under any circumstance is a gross and notorious act of despotism," it should be abundantly clear by now that America's ruling class has no interest in defending basic democratic rights as the drift towards a police state under Bush and Obama has become a repressive tsunami.

(Image courtesy of Alex Constantine's Anti-Fascist Encyclopedia)
Posted by Antifascist at 11:38 AM

i am posting this to my site, with links back. Please let me know if you want me to take it down. I have a contact form you can use at www.americanpendulum.com

Thanks for posting the piece, I appreciate it.